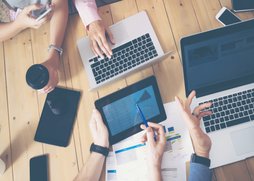 ‘We’ means AV Translations, a one-woman business that we deliberately keep on a small scale, but which has an extensive network of likeminded professional colleagues. The manager, Annelies Verbiest has known since an early age that she wanted to work ‘with languages’. It later turned out that her vocation was translation. She obtained a Master in Translation in 2005 from the  Higher Institute of Translators and Interpreters (HIVT), which has since become part of the University of Antwerp, and in 2006 she obtained a Master of Arts in Multilingual Business Communication from Ghent University (UGent). After a short preparatory period, she became a freelance translator in January 2007. AV Translations was born!

She has now been translating texts out of French, English and German into Dutch for more than ten years, with enormous pleasure and passion. She has built up a varied client base over the years and her satisfied customers have spread her excellent reputation by word of mouth.